We are dedicated to transparency and fairness in our service to you.

The San Francisco Public Utilities Commission consists of five members, nominated by the Mayor and approved by the Board of Supervisors. Their responsibility is to provide operational oversight in areas such as rates and charges for services, approval of contracts, and organizational policy. 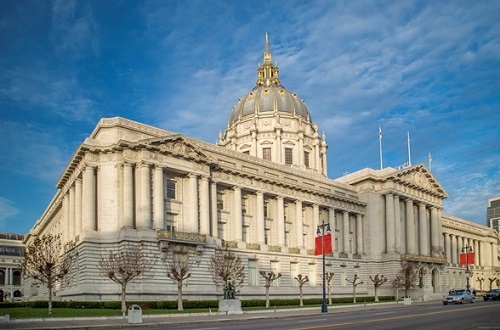 See the agenda for the next meeting of our Commission.

Broadcast on cable channel 78 and streamed on SFGovTV2. An archive of our live meetings is also available.

The following members of the San Francisco Public Utilities Commission completed Implicit Bias Training as required by S.F. Administrative Code Section 16.9-28, as of the dates listed below:

Learn more about the members of our San Francisco Public Utilities Commission.

Newsha K. Ajami, is the President of the Commission. She is the Chief Strategic Development Officer for Research in the Earth and Environmental Sciences Area (EESA) at Lawrence Berkeley National Lab (LBL). A leading expert in sustainable water resource management, smart cities, and the water-energy-food nexus, she uses data science principles to study the human and policy dimensions of urban water and hydrologic systems. In her role at LBL she is focused on developing and leading interdisciplinary and impact-focused research initiatives at the nexus of water, energy, and climate.

Dr. Ajami was a two-term gubernatorial appointee to the Bay Area Regional Water Quality Control Board. She is a member of National Academies Board on Water Science and Technology and serves as a Nonresident Senior Fellow at the Brookings Institute. Dr. Ajami also serves on number of state-level and national advisory boards. Before joining LBL she served as the founding director of the Stanford Urban Water Policy program and as a senior research scholar at the Stanford Woods Institue for the Environment. Earlier in her career, she also served as a Science and Technology fellow at the California State Senate’s Natural Resources and Water Committee where she worked on various water and energy related legislation.

She has published many highly cited peer-reviewed articles, coauthored two books, and contributed opinion pieces to the New York Times, San Jose Mercury and the Sacramento Bee. Dr. Ajami received her Ph.D. in Civil and Environmental Engineering from the UC, Irvine, an M.S. in Hydrology and Water Resources from the University of Arizona, and a B.S. in Civil Engineering from Amir Kabir University of Technology in Tehran.

During her tenure, Commissioner Maxwell worked for more equitable distribution of public resources, increasing economic development opportunities for all San Franciscans, and nurturing and empowering our City's most vulnerable residents. Commissioner Maxwell continues to advocate for environmental justice, clean energy, and children's health and educational programs.

Commissioner Maxwell was the Chairperson of the Land Use and Economic Development Committee, where she focused on sustaining and enhancing San Francisco's communities by investing in its residents.

As a member of the Government Audit and Oversight Committee, she was a driving force for accountability and transparency in local government, and for new business and economic development.

As a member of the County Transportation Authority and a Board member of Workforce Investment San Francisco, Commissioner Maxwell played an integral role in shaping San Francisco's workforce system. One of her goals was to support strong working partnerships involving businesses, educational institutions, community-based organizations and City agencies.

"All San Franciscans are a source of true pride, and they represent the most important resource for our City's future."

Commissioner Maxwell serves in Seat 2: Shall be a member with experience in ratepayer or consumer advocacy. Her current expires August 1, 2025.

Tim Paulson has over two decades of experience in the labor movement. In 2018 he was elected the Secretary-Treasurer of the San Francisco Building and Construction Trades Council, which consists of 32 unions representing 20,000 San Francisco construction workers.

A Journeyman Tilesetter since 1981, Commissioner Paulson served as a principal officer and business agent for the 45-county Bricklayers, Tilelayers, and Allied Craftworkers Local 3 and was Apprenticeship Coordinator for the Northern California Tilelayers and Tile Finishers Joint Apprenticeship and Training Committee.

He holds a bachelor’s degree in economics and political science from Macalester College and lives in San Francisco.

Commissioner Paulson serves in Seat 3: Shall be a member with experience in project finance. His current term ends August 1, 2024.

Anthony ran the Bureau of Equipment where he managed the SFFD's fleet of vehicles and procured firefighting equipment. He incorporated green technology into the department's fleet. He added solar panels to all of the SFFD's vehicles, replaced the gasoline powered rescue tools to electric, and introduced significant emission reducing features to the large vehicles in the fleet. Anthony was nominated for the 2016 SPUR Good Government Award for his achievements.

He reached the rank of Assistant Deputy Chief where he managed the SFFD's capital projects, supervised purchasing contracts, and was the liaison to the SFPUC. His work with the SFUPC included hydraulic modeling for the extension and upgrading of the Emergency Firefighting Water System, the planning of City Distribution hydrants for large developments, and the modeling for disaster preparedness. Anthony also managed the fire department's ESER bond water projects, including the refurbishment of the SFPUC's two large capacity saltwater pump stations, cisterns, and the design and placement of water manifolds along the bay and Treasure Island for fireboat connections. Anthony also served as Director for the San Francisco Firefighters Local 798 board where he supported labor rights and participated in collective bargaining. He is a founding member of the San Francisco Firefighters Veterans Association, which promotes helping all veterans and reaching out to at-risk youth.

Anthony is a veteran of the United States Navy and was honorably discharged in 1994. During his time in the Navy, he held a Security clearance, studied oceanography, and served as an aircrew member in an anti-submarine patrol squadron.

Anthony currently serves on several boards of San Francisco organizations. He is an associate board member of the San Francisco Fire Credit Union. He serves on the Archbishop Riordan High School Alumni Board where he helped establish the Lt. Vincent Perez scholarship for economically challenged students in the City. Anthony is also a board member with the San Francisco Olympic Club's Foundation Committe which funds grants for underserved youth sports programs throughout the Bay Area. In addition, Anthony is a member of the American Legion Cathay Post #384.

Anthony and his wife, both native San Franciscans, are raising their two children in the city that they love.

Commissioner Rivera serves in Seat 5: Shall be an At-Large member. His current term ends August 1, 2024.

Kate H. Stacy worked as a Deputy City Attorney for the Office of the City Attorney of San Francisco where she served as the Chief of the Land Use Team (2008-2021), and as the Deputy City Attorney on the Land Use Team (1998-2008). Projects she managed included the Water System Improvement Program, Giants Ballpark, Mission Bay, M.H. DeYoung Museum construction, Palace of the Legion of Honor expansion, 34th America's Cup, Inclusionary Housing Charter amendment and legislation, affordable housing implementation, and office, mixed use, and housing development projects. She also served as General Counsel to the Planning Commission and Department, Historic Preservation Commission, and City Arts organizations.

Kate graduated from the University of Chicago Law School and received her B.A. from Swarthmore College.

Commissioner Stacy serves in Seat 4: Shall be a member with experience in water systems, power systems, or public utility management. Her current term ends August 1, 2026.

To request additional materials or information about the Commission, please contact the Commission Secretary by email at commission@sfwater.org; by phone at 415-554-3165; or by U.S. mail at 525 Golden Gate Avenue - 13th Floor, San Francisco, CA 94102.